The cool night air blew through the trees and a stray black hair tickled Maeve’s nose.

She brushed the offending tress aside and went back to her fishing.

Maeve had taken to wearing her hair long and out after it grew so unruly over the past few months. Having very little money for basic necessities left her spending  more simoleons on her construction projects than on her hair.

She didn’t mind though. Maeve felt her new look suited her and was, in a way,  her chance to become someone new and different.  A witch who could found a town and build houses, parks, and stores.

The old Maeve would have balked at such a task.

The new Maeve was excited.

And she was right to be.

Her first attempt at building was a huge success .

Well…if you considered a small wooden shack a success.  Which she did.

Maeve was extremely pleased with how her makeshift house had turned out. And she was even more excited about how the plants were growing on her lot. After a small (magical) nudge, Maeve had convinced some young trees to take root in her garden. They were quickly followed  by patches of wild flowers  who  snuggled up next to the lilies and snapdragons Maeve planted.

She didn’t have the heart to try and magic them away so they stayed. With a few large rocks that she managed to roll under the trees, Maeve felt her little haven was taking shape nicely. It turns out cowplants were a lot harder to care for than Maeve thought.  She couldn’t bare to get rid of Vina so she gave her a special place right next to the house. The expansion of Maeve’s garden meant she was always finding bugs on the ground and among the leaves of her plants.

Maybe I can use them in a potion?

Maeve found that without her wand, she could only do basic charms, the kind that children learned, like how to change clothes or clean the dishes with one finger, and she could do enhancement magic.

Enhancement magic was a very basic form of magic but powerful if done right. She could only enhance nature, making something that already exists more than what it is. Maeve’s plants grew faster because she nudged them toward what they already would be in the future.

It dawned on her that maybe her knack for this type of magic was why she was able to turn Sims into Witches.

She brought the idea up to Aqua the next time she saw her.

“So what do you think?” Maeve asked, interrupting the other woman’s fishing. Aqua had become more somber lately and Maeve hoped her questions might distract the her friend from any melancholy thoughts.

” I don’t know.” She said finally, ” Enhancement magic isn’t something my coven is fluent in.”

“Wow, there’s finally something I can do that you can’t.” Maeve struck a pose of confidence,  intending to be more teasing than serious.

Aqua’s lips twitched into a half smile. “So how are you going to test your theory, oh great one? You still need to find the right Sim for your coven.”

Maeve had already thought of this and grinned.

“How good are you at dancing?”

Maeve hung up the phone smiling from ear to ear. Her party guests would be there soon and she needed to get everything ready. Her big idea to get some of the most intriguing Sims in Newcrest to come to her home had Maeve practically glowing.

She hoped she had time to change.

Maeve’s guests arrived much earlier than she expected. Andrea glanced around the room, all smiles.

“Hey, your place looks great! Thanks for the invite.”

Maeve smiled at the other woman, remembering how she’d originally thought Andrea would make a great witch.

“Your Welcome. Would you mind going outside? I don’t think there’s enough room in here for everyone.”

Andrea laughed. “I think I can manage that.”

Outside the party was in full swing. Sims (and Aqua) danced to the music coming from an old radio Maeve was able to buy for a few spare simoleons.

All the gathered sims strut their stuff, dancing and getting to know each other by sharing stories about meeting Maeve.

“I was the first person she met in, Newcrest!” Summer boasted.

Andrea rolled her eyes, “Sure.” “Why aren’t you dancing?”  Andrea asked, when she noticed a skittish Luna sitting near the dead camp fire.

Luna shrugged,  “It’s weird being the youngest. My dad was in one of his moods so I was able to slip away. I’m not as glamorous as you guys. ”

Andrea chuckled “I wouldn’t call us glamorous. Except maybe Dina  but that’s just how she is.”

Luna giggled, “She hasn’t sat down once for fear it will ruin her dress.”

“Because silk and wood don’t mix, of course.” Andrea pretended to stick her nose in the air and look down on Luna. The younger sim burst into a fit of laughter.

“Feel better?” she asked once Luna’s laughing fit had calmed.  Luna nodded and Andrea smiled, “See! Maeve wouldn’t have invited you if she didn’t think you would enjoy it.”

And enjoy it she did. Luna stopped hiding and spent the rest of the party dancing.

With the occasionally giggling at Dina’s desperate attempts to get Sergio’s attention.

Maeve almost forgot her original intentions for the gathering because of all the fun she was having. Sims really knew how to have fun. (Who knew?)

She immediately glossed over Sergio, who had never jumped out at her as being suited to the craft. Maeve tried to look at all the other Sims but her eyes kept being drawn back to Andrea who smiled brightly at her from across the lawn.

Maeve wasn’t sure but there was something there. Some deeper instinct that compelled her to watch Andrea closer.

As the sun began to set the party dialed down and Maeve waved goodbye to her quests.

Aqua, who’d taken it upon herself to light the campfire, sat, serene and beautiful like a lake’s surface, staring into the flames.

The fire crackled and snapped against the wood, reminding Aqua too much of a certain sister of hers whose words could burn just as easily as the flame in front of her.

“I’ll decide my fate.” She whispered, mostly to herself and a little bit to the fire. 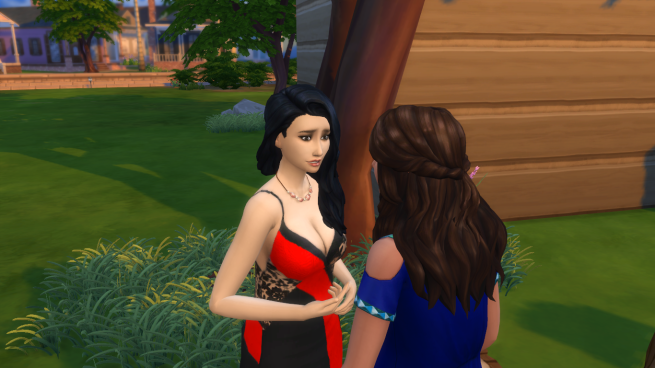 And that’s how Maeve found her friend. Aqua could see that her sister witch was full of nervous energy. Maeve’s eyes were bright as she asked, “How do you think it went?”

Sorry it took so long for me to post this guys! I’ve been working on growing my channel so I haven’t written much recently but I’m super excited to get back into it!

Hey guys, I’m Tia! I'm and'm a recent college grad that likes I tea, animals, books, and Sims. I have a Youtube channel called TeaCup Simmer where you will find stories brought to life. I create Sims versions of bestselling books and famous tv shows, with my own little twist. View all posts by TeaCup Simmer